How one man rode through time.

A hundred years ago, on a cold summer’s morning in 1916, Charles K. Findlay unknowingly began a journey through time. Charles was just 16 years old the morning he fired up his 1916 Indian Power Plus and headed north. He had planned the ride to the minute and raced over macadam, dirt, mud, mountains, streams and rivers to meet his goals. What he didn’t plan on was that his story would capture my heart and whisper to my motorcyclist-soul to tell his story to the world. As a record holding Iron Butt Rider, I relate to a well-planned and executed timed ride. As a rider that doesn’t hesitate to take street bikes down a muddy forest roads or to the Arctic Circle or across creeks, I feel a kindred spirit in him.

His story will speak to everyone who has ever swung a leg over any type of motorcycle. His youthful swagger and humor are charming and his exuberance is contagious.

The spirit of Findlay’s Road Project is to recreate Charles K. Findlay’s ride 100 years to the day exactly as he rode it. Now, that’s not actually possible, but what I have created is a route linking over 95% of the people and places he mentioned in his 1916 Diary. I’ve also created a route with over 90% of the roads having existed on or before 1916.

This scavenger hunt across both time and space has been my passion and a life’s work. It will outlast me and will be the delight of motorcycling enthusiasts for decades to come. I’ve been working closely with Charles’s three remaining decedents, one of whom is a historian and genealogist, to write this amazing man life story. Not only did he love motorcycles all his life, but he flew planes, played the cello, loved all forms of travel and was a prodigious photographer.

For the past few years I’ve been working with 1915, 1916 and 1919 Automobile Blue Books, countless historic topographic maps, historic soil maps, rail road maps, libraries, universities, historical societies and museums to recreate his journey on roads that he could have ridden. By connecting the places and using the descriptions he offers in his 1916 diary with roads, ferries, bridges and towns that existed in 1916 or before, I’ve created a route that will very closely mimic his. Of course there is no way of knowing the exact roads he rode, but I believe I have done all due diligence with regards to research. I’ll capture the spirit of his journey and do honor to his memory.

In 2016, I’m buying a 2016 Indian Scout and on June 8th, 2016 I’ll recreate his ride 100 years to the day on a bike 100 years newer and write his story from the saddle. This will include such things as recreating the ferry ride across the Savanah River via pontoon boat because his crossing is now under Lake Hartwell.

Check back often…there will be more to come soon… 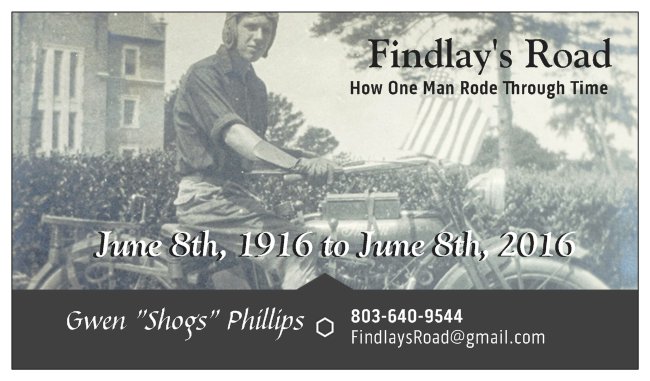 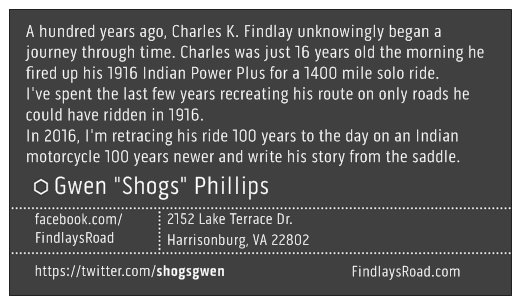